Dora
Baldi's Basics in Education and Learning for PC
Advertisement
Description: Baldi's Basics in Education and Learning for PC is a horror game created by mystman12. It is a modern, fully 3D-interactive entertainment game. In this game, the main character will try to escape from an angry teacher Baldi. He also collects all the necessary things along the way. The school is the main scene and it is populated by a variety of eccentrics. It makes the gameplay more fun and interesting. You also need to walk around different rooms in search of useful items that make the whole process easier.

Gameplay
Before starting the game, you need to choose one of two modes. The first is the story mode. In it, the player's task is to collect seven notebooks. Each of them lies in a certain class. To get a notebook, you will first have to solve two very easy examples.
The second is the infinity mode, which appeared in update 1.3. In it, the number of notebooks is unlimited and after their collection, they will appear again. And also there are practically no unsolvable examples: it occurs only once. The speed of the teacher's movement here will depend on the amount of playing time.
At the very beginning, the main character appears in the lobby of the school. In front of him is Baldi himself, who invites him to solve several problems. Only two rooms will be open: you cannot enter the others until the first two notebooks are collected. You need to go into any of the available classes, go to the teacher's desk and click on the notebook. A special menu opens with examples. Having solved them, the player must go to the next class. There he will find absolutely the same task, but with one difference: the third example cannot be solved.
After entering the wrong answer, Baldi begins to chase the player. And his speed is determined by the sounds of rulers on the arm. The more the player answers the questions incorrectly, the faster Baldi will chase him. Now, other characters will begin to appear in the game. They will stop you or help you in some cases.

Graphics
The project has an unusual design and extremely non-standard horror 3D graphics.

Conclusion
You need to collect all the notebooks, solve problems correctly and run away from school. For every wrong answer, an angry Baldi can scare you. And if he finds you, then there will be no turning back. To survive you need to know all the basics of Baldi. If you love to play horror and survival games then it is the best choice for you. 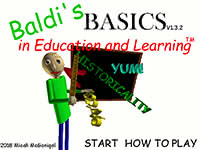 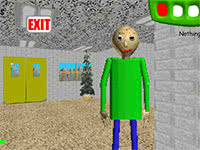 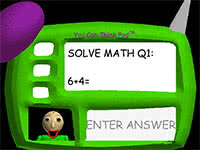 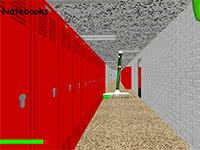 Reviews
FUN!! AND COOL GAME
By Tero (in Finland)
I love this game but it is so fun ❤️
By Rose
I love this game it’s the best game ever!!!!
By Victoria Grace Ruiz
I want to play the game
By James
Good game I love ❤️ And I think James and Gabe needs to make a YouTube channel
By Dorion Bolton
Hey man I love this game because it is one of the best horror games I've played.
By Joseph
What I want to go out to my school and see if baldi is ok
By By Mia Moore
I play this game on my iphone and I love it (:
By Jacob
See All Reviews
Advertisement
Hot Games